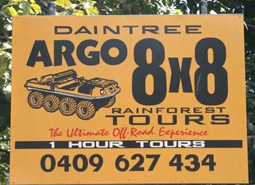 We recently travelled to Cairns to gain some respite from a chilly Canberra winter. In early August the days in Cairns were around 25C and simply wonderful. This trip is a little different from our normal camping trips, as we luxuriated in a resort for a few days. Whilst soaking up the sunshine we decided to have a look around the area.

For our first day-trip out of Cairns we headed up to the Daintree Forest. It was a great choice and we found a small personalised eco-tour conducted by Peter and Sally Maher from their cattle grazing property. Ceri and I prefer to stay away from the madness of large organised bus-type deals and the friendly Maher’s with their Argo 8 Wheeler really appealed to us. The property is bounded by the Daintree River, rainforest creeks and the Daintree National Park. What an amazing place to live! 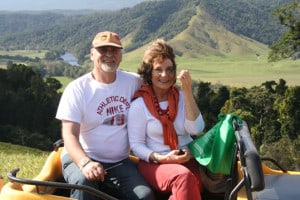 Bookings are made at the Daintree Village and the tour leaves from their property which is five minutes away. Peter unloaded the 8-wheel low-impact ARGO and we hopped aboard to begin our Daintree Rainforest Tour.  As we made ourway across the farm we passed a few of their beautiful Braham cattle and Egrets who share a symbiotic relationship with these beasts.

The cattle stir up insects while grazing and the birds follow in their wake harvesting the bounty. We then began climbing up through old logging tracks, right into the rainforest canopy with spectacular panoramic views over the valley and river below. Peter stopped every now and again and would explain various aspects of the vegetation and forest. As the advert says, this is the Ultimate Off-Road Experience and getting there is half the fun! 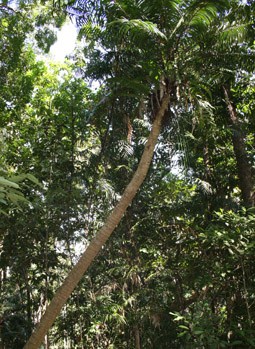 The Daintree Rainforest contains 30% of the frog, marsupial and reptile species in Australia, and 65% of Australia’s bat and butterfly species. 20% of bird species in the country can be found in this area. All ofthis diversity is contained within an area that takes up 0.2% of the landmass of Australia.

The Daintree Rainforest’s addition to the World Heritage List in 1988 in recognition of its universal natural values highlighted the importance of this rainforest.

The Daintree is an outstanding example of the major stages in the earth’s evolutionary history, an example of significant ongoing ecological and biologica l processes, and an example of superlative natural phenomena. It contains important and significant habitats for conservation of biological diversity. The Daintree Rainforest is over one hundred and thirty-five million years old – the oldest in the world. Approximately 430 species of birds live among the trees, including 13 species that are found nowhere else in the world. The primitive flowering plant Idiospermum australiense is also endemic to the Daintree.

For those interested in the mighty little machine that took us on the Daintree Rainforest tour, it features:

And comes with the following standard equipment:

Daintree Rainforest Tour, a great way to see the countryside! 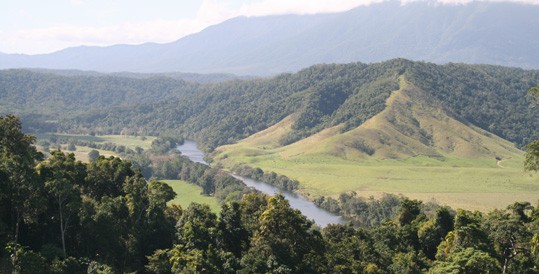