Trending
You are at:Home»Uncategorized»The Great Barrier Reef
By admin on December 30, 2014 Uncategorized

Like Uluru Kata Tjuta National Park the Great Barrier Reef is one of those must-see locations in Australia. After a pretty cold winter in Canberra we decided to take a few days and warm up in the northern part of Australia.

Although most of our holidays involve camping we only had a few days and decided to fly up to Cairns and stay in a Resort… a first for me! I’m not really one for organised tours but the package put together by Reef Magic cruises looked pretty attractive. Having undertaken the Train trip to Kuranda we werea little disappointed (return trip on the Skyrail was great)and were looking for a real tropical experience. The Reef Magic tour was simply fantastic and we enjoyed every minute. 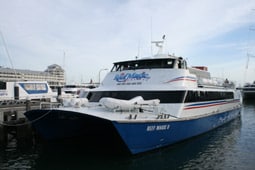 We left Cairns around 9am on the high speed Reef Magic catamaran and headed out for the 90 minute trip to the Reef. The voyag eout was a little sloppy once we moved onto the open water but most enjoyable. I had taken some Kwells as I suffer from sea-sickness and they worked perfectly! We sat outside on the trip out and breathed the cool salt air to ensure I didn’t bring up breakfast, but on the return trip we sat inside the comfortable saloon and I didn’t feel crook at all. Total bonus:)

Although there were a quite a few people onboard the ratio of staff to passengers was high which meant we were well looked after. We arrived at the huge Marine World pontoon which is moored on the Outer Reef and immediately hopped aboard the semi-submersible for a tour of the Reef. Viewing the extraordinary array of coral and fish through the glass sides of the ‘submarine’ was a thrilling way to begin our stay on the Reef.

The tour package includes snorkel, goggles and fins and all the swimming you can ask for. An extra option we elected to take was aguided snorkel tour with a marine biologist. This is a wonderful way to have the intricacies of the Reef explained as you swim about. During this excursion we came upon the huge Wrasse nicknamed ‘Wally’ which you can see below. This huge fish swam right up and then moved off to follow the photographer as she took underwater snaps around the Reef. The marine biologist then handed me a sea cucumber and spoke about the different varieties found along the Reef before carefully placing it back on the sea floor. 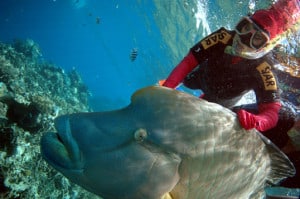 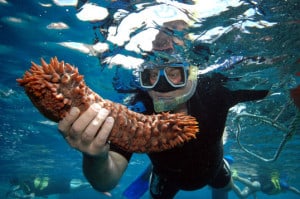 Steve with a sea cucumber 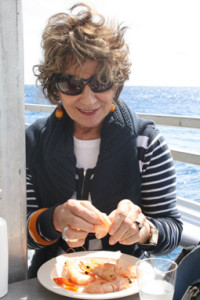 After our snorkelling exercise came a call for lunch, a hot and cold buffet and the quality of food was excellent. The helicopter buzzed overhead during lunch as people took in a birds eye view of the Reef. We ventured back onboard the Reef Magic and finished lunch with a drink from the bar. This is one tour certainly worth taking and includes:

The Great Barrier Reef is the world’s largest coral reef system, comprised of over 2,900 individual reefs and 900 islands stretching for 2,600 kilometres (1,600 miles) over an area of approximately 344,400square kilometres (133,000 sq miles). The reef is located in the Coral Sea, off the coast of Queensland in northeast Australia. 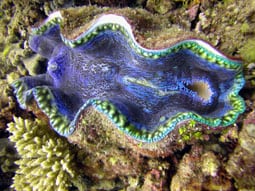 A large part of the reef is protected by the Great Barrier Reef Marine Park, which helps to limit the impact of human use, such as over fishing and tourism. Other environmental pressures to the reef and its ecosystem include water quality from run off, climate change accompanied by mass coral bleaching, and cyclic outbreaks of the crown-of-thorns starfish.

The Great Barrier Reef supports a diversity of life, including many vulnerable or endangered species, some of which may be endemic to the reef system. 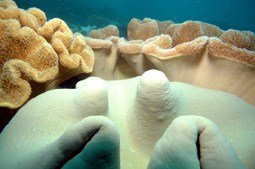 Thirty species of whales, dolphins, and porpoises have been recorded inthe Great Barrier Reef, including the dwarf minke whale, Indo-Pacifichumpback dolphin, and the humpback whale. Large populations of dugongslive there.

Six species of sea turtles come to the reef to breed – thegreen sea turtle, leatherback sea turtle, hawksbill turtle, logger head sea turtle, flatback turtle, and the olive ridley. Around 125 speciesof shark, stingray, skates or chimera live on the reef. Close to 5,000 species of mollusc have been recorded on the reef, including the giant clam and various nudibranchs and cone snails.

215 species of birds (including 22 species of seabirds and 32 species off shorebirds) are attracted to the The Great Barrier Reef or nest or roost on the islands, including the white-bellied sea eagle and roseate tern. Seventeen species of sea snake live on the Great Barrier Reef. They take three or four years to reach sexual maturity and are long-lived but with low fertility. More than 1,500 species offish live on the reef, including the clownfish, red bass, red-throatemperor, and several species of snapper and coral trout. Forty-ninespecies are known to mass spawn, with eighty-four other species found on the reef spawning elsewhere in their range.

Four hundred species of corals, both hard corals and soft corals arefound on the reef. The majority of these spawn gametes, breeding in mass spawning events that are controlled by the rising sea temperatures of spring and summer, the lunar cycle, and the diurnal cycle. Reefs inthe inner Great Barrier Reef spawn during the week after the full moon in October, but the outer reefs spawn in November and December. The common soft corals on the Great Barrier Reef belong to 36 genera. Five hundred species of marine algae or seaweed live on the Great Barrier Reef, including thirteen species of the genus Halimeda, which deposit calcareous mounds up to 100 metres (110 yd) wide, creating mini-ecosystems on their surface which have been compared to rainforest cover. 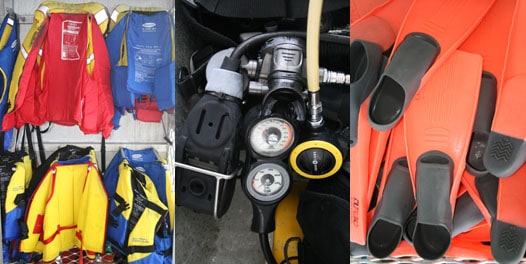