The hot air balloon is said to be the oldest successful human carrying flight technology and on November 21, 1783 in Paris, the first flight was made by Jean-François Pilâtre de Rozier and François Laurentd’ Arlandes in a hot air balloon created by the Montgolfier brothers. Balloons have come a long way since then and ours carried 20 people.

I’ve often seen the balloons floating silently over Canberra and wondered what it would be like to be aloft in one. We decided to share the Cairns hot air ballooning experience with my parents and booked a flight over the Atherton Tablelands. Initially I was a little concerned that it might be too adventurous for my parents who are in their 70s. However they had no problems even when the basket was put on its side as part of the disembarkment procedure!

The coach pick-up from the hotel was at 5am so we all had an early start to be ready. The balloons lift off from Mareeba on the Atherton Tablelands, about an hours drive from Cairns.

The unique flying conditions at Mareeba provide 98% tour reliability.This statistic is quite amazing and is unmatched anywhere in the world within the Ballooning industry. 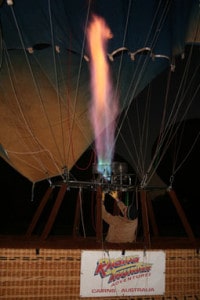 On arrival at the launch site in the half light, six balloons were slowly being inflated, already looming like skyscrapers on their sides. Blue fiery blasts of gas lit up the morning sky and it felt like we were at Cape Canaveral.

Before we knew it we were climbing into the basket, going over final safety checks and learning to how to brace-crouch in the event of some mishap. As the horizon turned to gold we begun our ascent kept warm by the regular blasts of propane gas above our heads. Soon we were at 4,000 feet and although we couldn’t feel the breeze we were moving across the ground at 35 knots. Our pilot pointed out coffee plantation sand other interesting locations, but the joy was simply in the flight.

The 30 minute flight soon came to an end and as we descended through alight mist we could see kangaroos bounding away beneath us. The pilot made a great landing, although none of us were prepared for the basket to be gently tipped on its side. The basket anchors the ‘envelope’ or balloon whilst it is being deflated and prevents the wind dragging it along the ground.

Raging Thunder has Australia’s largest fleet of hot air balloons and the highly trained crew make the balloon flight a thoroughly enjoyable experience. After we’d come down to earth, a short 10 minute coach ride took us to the Mareeba Heritage Centre where we enjoyed champagne, fresh juices, eggs & bacon, and tropical fruits.

Our tour also included return transfers back to our Cairns accommodation. Cairns hot air ballooning is not a cheap experience ($190 a head) but something one should do at least once in a lifetime! Many of the accommodation places have links with the balloon operators, and will help book the flight and even pick you up from where you are staying. 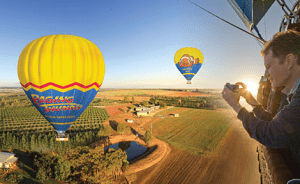 A hot air balloon consists of a bag called the envelope that is capable of containing heated air. Suspended beneath is the gondola or wickerbasket (in some long-distance or high-altitude balloons, a capsule) which carries the passengers and a source of heat.

In today’s balloons the envelope is generally made from nylon fabric and the mouth of the balloon (closest to the burner flame) is made fromfire resistant material like a firemen’s suit, such as Nomex.