Trending
You are at:Home»Uncategorized»Stevensons Peak
By admin on January 10, 2015 Uncategorized 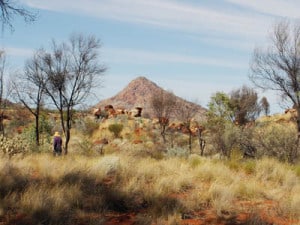 From a European perspective William Christie Gosse discovered Stevensons Peak in 1873. Of course this area was the home of Anangu for thousands of years prior to this ‘discovery’.  In 1859 Gosse joined the South Australian Government Survey Office in 1859 and in 1873  lead a government expedition to explore between the Overland Telegraph Line at Alice Springs and Perth. 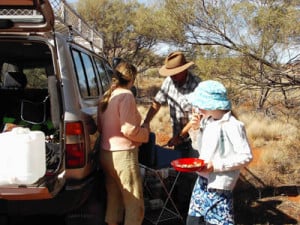 Gosse’s party consisted of his brother Harry, Edwin Berry, Henry Winnell, Patrick Nilen, three Afghan camel drivers (Kamran, Jemma Khan and Allanah) and an Aboriginal boy, Moses. A mixed party of horses, camels and a wagon left Alice Springs telegraph station 23 April 1873. Some three months later Gosse arrived at Uluru – which he named Ayers Rock. His description mirrors the astonishment he felt: ‘The hill, as I approached presented a most peculiar appearance…it was one immense rock rising abruptly from the plain…[It] appears more wonderful every time I look at it, and I may say it is a sight worth riding over 84 miles of spinifex sandhills to see.’ 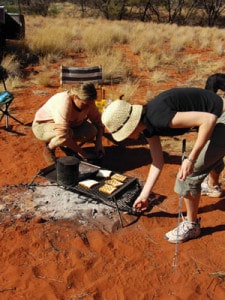 From Uluru, Gosse and his party explored west to Mount Olga and Stevenson’s Peak, and then south to the Mann Ranges.  We were all working at Uluru Kata Tjuta National Park in 2005 and headed  out to Stevensons Peak for a relaxing break. Our party sought the permission of Traditional Owners to visit and camp on their homelands which was granted much to our pleasure. What an amazing trip it was for us, passing through Casuarina glades and beautiful spinifex country. At one point we encountered grass trees (Xanthorrhoea thorntonii0) and having grown up in the Great Victoria this was a great surprise and joy to see.

I haven’t done too many group trips like this but I have such fond memories of this trip. We camped together, swapped stories and Damien and Suzie’s children who’d lived most of their life on the East coast made their own fun.

For and me and as someone born and bred in the Interior there was a meeting of kindred spirits in sharing this time together,  a wonderful few days devoid of work and a shared/melded in experience.