Trending
You are at:Home»Fishing»Cervantes Fishing
By admin on December 31, 2014 Fishing 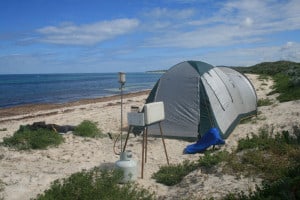 We found a great spot to launch the 12 foot dinghy off a beach south for our Cervantes fishing (north of Grey although exact location is not being revealed:) We have been back a few times, camped on the beach and both beach-fished and taken the boat out. Cervantes is about a three hour drive north of Perth, and you just follow the Indian Ocean Drive north.

The town of Cervantes is relatively new, only being established in 1962 for the crayfishing industry. The town is named after an American whaling ship that was wrecked along this section of the coast in 1844. Those who survived the wreck set out on a 160km walk south to Fremantle. The captain of the wrecked Cervantes was Sylvanus Gibson and the local paper, The Inquirer & Commercial News wrote a report of the saga on July 10th 1844: 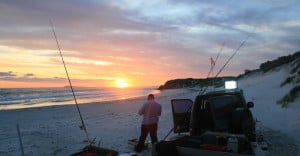 Rigging up for night fishing

‘On Saturday evening between eight and nine o’clock, three seamen belonging to the American whale ship Cervantes, of New Bedford, arrived at Fremantle in an exhausted state, and reported the wreck of that vessel upon an island in Jurien Bay, about 100 miles northward of this. Yesterday, the master, Captain Gibson, and some more of the crew arrived and stated that the vessel was wrecked on the 29th June and that one man had been left about 30 miles beyond the Moore River unable to proceed further, and that six others, after walking some distance with them, had returned to the wreck, with the intention of making their way here in a boat. The vessel was but a short time from America and had only about 10 barrels of oil. The master reports that the vessel is but very little damaged, and likely to remain in a perfect state for a long time. He has applied to the government to send the Champion in search of the missing men, and to bring the effects of himself and crew – an application which will doubtless be complied with. The poor fellows, who are of course, in a destitute state, have been provided for by R.M.B Brown Esq., the Resident Magistrate.’ 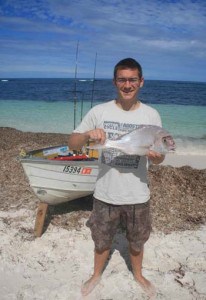 Anyway we found a spot south of Cervantes where we could access the beach from a 4WD track. After three trips now we have really only had one that resulted in any fish. One of those trips it blew a 40 knot gale for the 3 days, quite unpleasant to be on the beach. We just kept hoping it would disappear and let us fish. It did finally clear… on the morning we had to leave, always the way.

The days need to be pretty calm for Cervantes fishing as we have to negotiate through the inner reef a few metres from the shore, but we have found that if we can get out beyond this reef there is still some structure and we pulled in a couple of snapper and tailor. On one trip we put in our ‘pensioner’ cray pots with Orange Roughy heads as bait but no luck. Haven’t used our pots again, with such a little dinghy it is a tough haul pulling them back onboard. In fact I thought we were going to lose them at one stage as the next day cut up pretty rough and we only just managed to get back out to collect them.