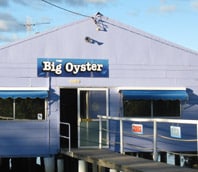 Oysters and Prawns: When visiting seaside towns it is always a treat to eat fresh seafood, and this trip was no exception. Earlier in the day we had mentally noted the Big Oyster while driving around Port Macquarie, and managed to get back just on closing time.We bought 2 dozen oysters and half a kilo of Yamba Prawns. We chilled down the oysters then plated with two big slices of lemon.

The Hasting Oysters are a bit salty and very creamy with a slight mineral taste. The colour of the meat has a slight yellow hue; ours had only been shucked that day and tasted great.

The prawns were well shelled and served with a dip and salad. The oysters and prawns as a meal were simple and delightful. 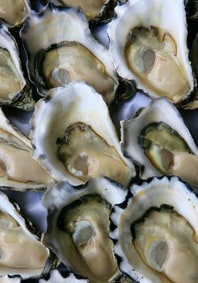 There are about 30 commercial oyster farms along the Hasting River around Port Macqaurie and not too many bother to harvest during winter months. Oyster farmers rely on the rain like any farmer, and long drought periods can turn the water salty and bring in many different species of plants and animals from the sea, which create problems for their industry. On the other hand too much rain can mean no business, as they are not permitted to harvest once a certain amount of rain has fallen.

If you would like to get your own oysters, they can be collected from along the entrance rock break wall, wharf pylons and any place that is not a designated oyster lease. There is a bag limit of 50 per day, but beware as oysters may be contaminated through either pollution or naturally occurring algae. Eating contaminated shellfish can cause serious illness or death. Commercially grown oysters are harvested under strict guidelines to safeguard public health.

Did you know? Oysters are not fed or treated with any chemicals throughout their lifetime in the water or after harvest; A Sydney Rock Oyster will filter an estimated 0.25 ML of estuarine river water, with all NSW farmed oysters removing over 1 million tonnes of suspended material, mostly phytoplankton, in their lifetime; Most oyster species change sex during their life; An adult female oyster releases between 20 to 40 million eggs and a male, hundreds of millions of sperm at spawning.

The King prawns we purchased at the Big Oyster came from the Clarence River region. This area is best known for its Eastern King Prawns, or the famous Yamba prawn (Melicertus plebejus).

Apparently Australian consumption of prawns is about 30, 000 tonnes a year, of which Australian commercial wild catch fisheries provide around 50%. Imports from South-East Asia account for 40% of this demand whilst the domestic aquaculture industry supplies the remaining 10%.

Yamba prawn trawlers have become a tourist attraction along with their fishy catches. They trawl the river, lake and ocean mostly at night and by early the following morning their catches are for sale in fish shops, other outlets and by lunchtime on the menu at many local restaurants.

“I’ve had big and small, cheap and dear, fresh and frozen, firm and soft, tasty and bland, prawns in my 51 years of enthusiastic consumption but only a Yamba prawn delivers the best in quality, quantity and price.” Mike Harvey – Elders Real Estate, Yamba.