Trending
You are at:Home»Uncategorized»Mulgara
By admin on January 24, 2015 Uncategorized 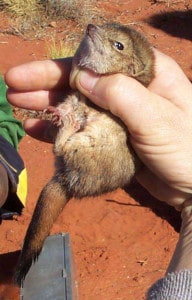 The Mulgara is an Australian native carnivorous marsupial and feed on a fairly wide range of insects, scorpions, centipedes, locusts, spiders, rodents, other small marsupials and reptiles. The Mulgara are also closely related to other predators like the Tasmanian Devil and the quolls.

When I was a child they were considered to be a single species, but now are categorized into two species in the genus Dasycercus. The Crest-tailed Mulgara (D. cristicauda) has a crested tail, three upper premolars, and eight nipples in its pouch. The Brush-tailed Mulgara (D. blythi), differs a little as it has a non-crested tail, two upper premolars, and six nipples. They have quite large eyes with small thin ears which are sparsely furred.

The fur on top of the body and tail is a reddish brown or gingery in colour becoming whiter underneath. It is bigger than a mouse and has a compact, stocky body with a head slightly in bigger proportion to the rest of the body.

A burrow entrance can be seen in the picture below and they dig complex systems (with 2-9 entrances) on the flats between sand dunes, often in spinifex grasslands. They will also use the burrows of other animals and these underground homes will have a grass-lined nest chamber for their young. 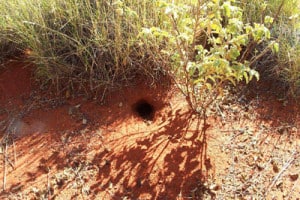 The Mulgara is well adapted to living in the hot sandy desert conditions of Central Australia where they are found. Fluids are obtained through its prey and in producing highly concentrated urine and dry faecal pellets moisture requirements are reduced.

The presence of Mulgara in spinifex grassland generally means the environment is healthy and fire in the area is well managed, grazing is at sustainable levels, and predator numbers are under control. These small marsupials are vulnerable to predation by cats and foxes. More information about its status, distribution and life-cycle is available from the Department of Environment web site.