Trending
You are at:Home»Uncategorized»Marsupial Mole
By admin on January 18, 2015 Uncategorized 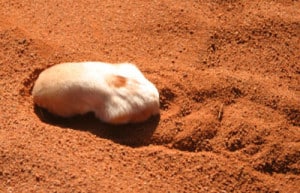 The Southern Marsupial Mole is classified as ‘endangered’ in W.A. and ‘vulnerable‘ in S.A. and N.T.  Not too many have been recorded in the last 50 years compared with earlier last century. Little is known about its way of life as they live underground and don’t survive in captivity for very long.

The image above on the left was taken when one surfaced in the dunes near Uluru. In the ‘wake’ behind the animal you can see sand ripples as it ‘swims’ through the sand. The don’t spend much time on the surface, but swim in the sand about 20 cms (8 inches) below the surface, backfilling as they progress.  They breathe the air that flows between sand grains and generally only come up after heavy rain. The claws on its front feet are like spades, so when burrowing, it moves them up and down in a chopping action, and the hind feet pushes the sand out the back. The stubby tail with a pad at the front is use to lever itself forward.

Their burrows can be 2m (6.5 feet) underground so they are quite the subterranean traveler. To help in the sandy travels, the female pouch to carry and suckle young opens toward the rear so it is not filled with sand as they dig and kick sand. A paper by Natalie Warburton called “Functional morphology and evolution of marsupial moles” (Marsupialia: Notoryctemorphia) from the University of Western Australia has a lot of in depth information on these highly specialised burrowing marsupials (just click on the full-text icon to read the full paper).