Trending
You are at:Home»Uncategorized»Bush Turkey
By admin on January 24, 2015 Uncategorized 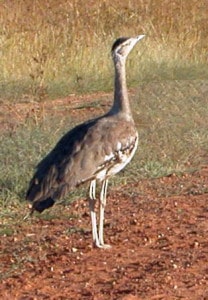 The Bush Turkey or Australian bustard (Ardeotis australis) is a large ground bird living in grassland, woodland and open country across northern Australia but are increasingly rare or extinct in the south. I remember seeing large groups after good summer rains in the Victoria Desert and they were an important food for local Aboriginal people in days gone by. It is the largest flying ground dwelling bird in Australia and it is wonderful to see them in flight, although they often don’t fly too far and only after being disturbed.

It stands proudly with an erect posture, and has a prominent brown-black cap, and long legs. The head, neck and breast are grey-white, with dark grey specks. The upper surface of the wings and tail are brown with fine dark patterns.

The Bush Turkey has a broad, omnivorous diet found on the grasslands, including: fruit, seeds, invertebrates and small vertebrates. They move readily, following good rains where grasses and insects flourish. You also see them on the periphery of fires finding cooked food and they also love to follow grasshopper outbreaks across the landscape. The Atlas of Living Australia has more information on the Bush Turkey in terms of distribution, literature and classification.