Trending
You are at:Home»Uncategorized»Tasmanian Devil
By admin on January 24, 2015 Uncategorized 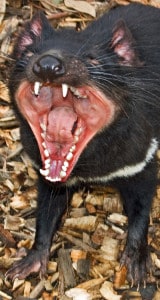 The Tasmanian Devil (Sarcophilus harrisii) is a carnivorous marsupial belonging to the family Dasyuridae. Once living across mainland Australia it is now only found in Tasmania. It is about the size of a small dog, and following the extinction of the thylacine in 1936 it is the largest carnivorous marsupial in the world.

The Tasmanian Devil has a stocky and muscular body, black fur, and has a strong odour. Its call is a loud and disturbing howling screech which you can hear by playing the audio track below:

The beast has a very keen sense of smell, and quite ferocious when feeding. When I was trapping in the highlands of Tasmania and if a Tasmanian Devil found a possum before me the only remnants would be a few tufts of hair. They ate the lot, bones head, feet and fur. Haven’t heard of too many people really troubled by the Tassie Devil but I would always cock an ear when I heard them snuffling about in the night.

The Tasmanian devil’s great blocky head and strong neck allow it to generate one of the strongest bite per unit body mass of any living mammal land predator. The jaw can open to 75–80 degrees as seen in the picture to the left. It does hunt prey itself but also scavenges carrion. Although it usually lives alone, it sometimes shares food with other devils and defecates in a communal location. 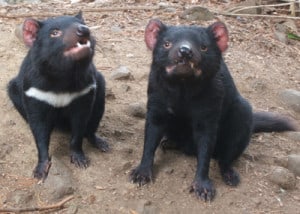 Markings on a Tasmanian Devil

Unlike most other dasyurids, the devil thermoregulates and it can be active during the middle of the day without overheating. Despite its portly appearance, the Tasmania Devil is capable of surprisingly high speed (13 km/h or 8.1 mph) for short distances, and can lope along for miles. It can also can climb trees and swim across creeks and rivers. The fur colour is usually black, sometimes with white patches on the chest and rump (although approximately 16% of wild devils do not have white patches).

Since the late 1990s, the facial tumor disease peculiar to Tasmanian Devils has impacted on the population and threatens the survival of the species. In 2008 it was declared to be endangered. Programs are currently underway to reduce the impact of the disease, including an initiative to build up a group of healthy devils in captivity, isolated from the disease. In 1987 I helped build an enclosure for the Philip Island wildlife park in Victoria which was populated with devils from the Mole Creek area in Tasmania. I have often wondered where they ended up. More information on the tumor disease is available on the Tasmanian National Parks web site.