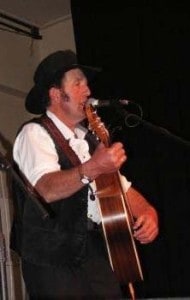 The Buckleys Crossing Hotel was built about 1889, and it offers very cheap accommodation in the historic town of Dalgety. The pub has been overhauled and, is neat, clean and tidy (with electric blankets on the beds). If it isn’t freezing you can kick back in the beer garden or on the verandah overlooking the iconic Snowy River. The Hotel is open seven days for lunch and dinner, and we had lovely lamb shanks with vegetables.
We were fortunate enough to be in Dalgety at the same time as a young shearer was having his 18 birthday. There are about 70 people who live in Dalgety, and they were all at the party. Ernie Constance played a whole bunch of great country music.

If you don’t know Ernie he has had approximately 30 songs recorded by major artists including sixteen by our great legend, Slim Dusty. Hits for Slim were “Things I See Around Me”, “Three Hundred Horses” and “When the Currawongs Come Down”.

Ernie spent twenty five years as a shearer and now runs the family grazing property with Merino sheep and beef cattle in conjunction with his music career. If you like country music then you’ll love Ernie Constance. 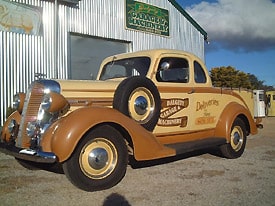 Dalgety is the only town left on the Snowy River in New South Wales, after the Snowy Scheme was built and the old towns of Jindabyne and Adaminaby were flooded.

When the township was surveyed in 1874, Dalgety was known as Buckleys Crossing. During those years it was a place stockmen could cross the Snowy River with their stock. It was also the perfect place for bullock trains to cross, back when they were an important mode of transport. For people, there was a punt across the river before the bridge was built in 1888.

Dalgety House dates back to the 1850s and the original Coach House still stands at the rear. Buckley’s Crossing Hotel is the social hub of the town and has a great display of old photographs. Interestingly, Dalgety was a proposed site for the nation’s capital city in 1902. One has to wonder what a city might look like there.

If you are around during daylight hours, drop in to the Dalgety Garage. It is an old fashioned Garage that offers a step back in time. Stop for your Fuel, Ice, Gas, Oils, Fishing Licences and Tackle or just browse through the Garage Memorabilia. Open 7 days – 02 6456 5170.