Trending
You are at:Home»Uncategorized»Witchetty Grubs
By admin on January 13, 2015 Uncategorized 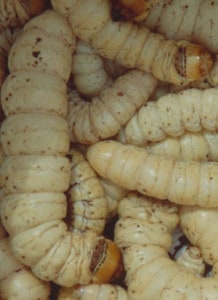 Witchetty Grubs (Endoxyla leucomochla) or ‘bardi’ as I knew them as a child in the Great Victoria Desert were an occasional delicacy that women would dig up and roast on the fire. I’m open to suggestions but I think the Witchetty name comes from Queensland Aboriginals where it is called ‘witjuti‘ in language. Of course I grew up in the Great Victoria Desert and for Aboriginals of this area it formed part of our ‘desert’ or ‘sweets’ and not necessarily a main meal. A great little supplement to a kids diet. They are best cooked in the dying coals of fire. Shallow slits are drawn in the hot coals and the bardis dropped in, head to tail and quickly covered over. It only takes a couple of minutes and you hear the popping sound where coals are raked off and they are ready to eat. On other occasions where you only have a couple they can be eaten raw, putting the body into your mouth and biting off the head.

Witchetty grubs are the larva of a large grey wood moth with finely mottled wings and a wingspan of about 16cms. It is found in central Australia in the root system of the Witchetty Bush (Acacia kempeana) and another acacia.

However, not every bush has them and the skill is identifying which bush is home to this grub. The witchetty grubs grows to around 7cm and pupates inside its tunnel. A hole is dug out from the base of the tree to pick up the roots then followed along until the tell tale sign of a swollen root is found, and shows where the grub is eating.  Would you like a career in entomology? (the study of insects and arachnids). I prefer eating them (just joking as I’m fascinated by our insects) and Sydney University has a short descriptive page on Witchetty Grubs and links to course material if you are interested.