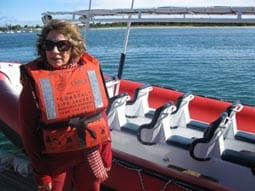 Whale watching: The humpback whale (Megaptera novaeangliae) is a baleen whale. It is one of the larger species, and adults range in length from 12–16 metres (39–52 ft) and weigh approximately 36,000 kilograms (79,000 lb).

The humpback has a distinctive body shape, with unusually long pectoral fins and a knobbly head. This huge animal is often quite acrobatic, breaching and slapping the water from high in the air. The males produce a complex whale song, which can last for 10 or20 minutes and is repeated for hours at a time, like a loop. No one really understands the whale songs, but the purpose of the song appears to have a role in mating.

Found in oceans and seas around the world, humpback whales typically migrate up to 25,000 kilometres each year. Humpbacks feed only in summer, in polar waters, and migrate to tropical or sub-tropical waters like Port Macquarie to breed and give birth in the winter. During the winter, humpbacks fast and live off their fat reserves. The species’ diet consists mostly of krill and small fish. Humpbacks have a diverse repertoire of feeding methods, including the bubble net feeding technique. 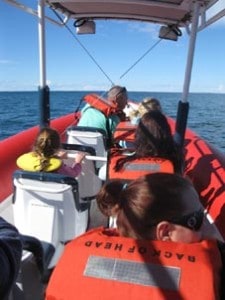 At Port Macquarie you can also see the Bryde and Minke (pronounced – Minky) Whales. The Bryde has twin blowholes with a low splashguard to the front. Like other rorquals it has no teeth but has two rows of baleen plates. They tend to blow once, then dive and stay under for a long time… not so good in terms of whale watching.

The Minke whales are the second smallest baleen whale – only the pygmy right whale is smaller. At sexual maturity (around 6–8 years of age), males measure an average of 6.9 meters (23 ft) and females 7.4 meters (24 ft) in length. Our fighter-pilot captain said there had been a Minke whale and calf in the area for some days.

What did we see? nada.. nothing… zero whales. However we arrived at the end of May and the ex Navy jet-fighter-pilot who owned the boat we went out on said whales are only reliably seen towards the middle of June. We simply lucked out at the wrong time of the year. Nevertheless, I was disappointed as part of the whole visit to the area was to see some whales.

The moral of the story? Go whale watching towards the end of June, that way you are bound to see some. For me, it will be another time.