Trending
You are at:Home»Uncategorized»Triops australiensis
By admin on January 18, 2015 Uncategorized 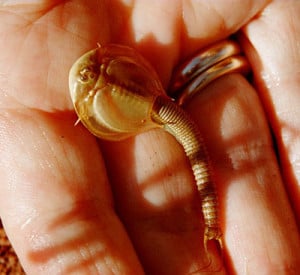 My first Triops australiensis was identified for me in 1965 by Dr. Ride from the Perth Museum.  He was on a field trip to Yamarna where I grew up to study hopping mice and we had heavy rains which rendered roads impassable for 3 weeks.

Dr. W. D. L. Ride, (8 May 1926 – 6 November 2011) was born in London, England in 1926, the eldest son of Sir Lindsay Tasman Ride. After migrating to Australia he specialized in Australian vertebrate zoology and paleontology.

After the rains had stopped I would play in the creek, savoring the fresh water and enjoying a place to swim and cool off for a few weeks before it slowly dried up. On this day and in the muddy shallows we found many Triops australiensis and he explained the strange little creature to me. As a 6 year old our few days of exploration had a lasting impression. He sparked my desire to study antiquity and I often credit my later degree in archaeology and palaeoanthropology to this this brief interlude.

Triops australiensis is often called a Shield Shrimp, which no doubt gets its name from the shield-like armour carapace over its head and upper body, The little beasts can grow up to 7.6 cm (about 3 inches) in length, and propels itself in shallow water with the whip-like, segmented tail and the mass of 60 or so legs.

The Shield Shrimps belong to the group of crustaceans called “branchiopods” and have “gill feet”: These leaf-like, lobed feet have a gill plate which allows them to breathe through their feet. Males and females really can’t be distinguished, except females can been seen carrying their eggs under the body.

Amazingly, the eggs can survive for many years in the dried out mud or dust before hatching and the eggs are transported to other places by wind or on the feet of animals. Eggs hatch very quickly after rain and they grow into adults within a few weeks.

The shield shrimp closely resemble fossil specimens dating back 250 million years, although some recent study suggests that while current and old species they look alike they have different origins and are not necessarily “living fossils”. iNaturalist.org has additional information on the little beastie with some references if you would like to explore.