We think Timbertown is one of Australia’s finest Heritage Parks. It is set amongst 87 acres of natural forest, and is an entire village, re-created to demonstrate the struggles and achievements of our pioneers. This is not a Disney replica, it’s an authentic heritage township, where the horse and carriage still runs, timber is a big feature, and the bullock team still hauls its heavy load. You’ll smell the distinctive aroma from the steam engines, the smell of sawn timber and the smell of home style cooked meals.

Until recently, the village was run by council ‘committee’ and gradually became run-down, to the point where even the steam train stopped running. Alison and David Waite are energetic entrepreneurs from Sydney who could see the value and economic sense in restoring it to its former glory days.

We went to the village thinking we would be there-n-gone within an hour. How wrong! Three hours later we still hadn’t seen everything. 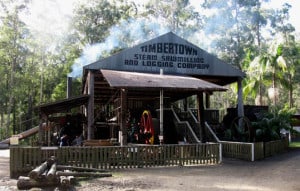 I was absolutely taken with the steam-run sawmill seen above, and in the video below. Most of its equipment was originally built and located on the Allyn River at the foothills of the Barrington Tops.

The mill opened in 1943 to process timber close to its source and ceased operating in December 1970. It was purchased by Timbertown and reassembled in the park in 1977. The building is typical of mill structures, which were a common site around this area until the 1970s. Wauchope at one time during the 1950s was home to 36 licensed mills.

The mill onsite is the only remaining mill in Wauchope today. The Timbertown mill was re-assembled for best viewing by the visitor, with all working equipment above ground. Originally, the work floor, main drive shaft, belt races and driving gear for the frame saw would have been located underground or set into the side of a hill. The boiler runs a number of steam engines driving a variety of equipment.

The loading ramp to the framesaw would have been level for the rolling off of logs from bullock team or steam drogher. “…it contained a blacksmith’s shop and other facilities to keep the equipment in good repair. There was quite a big wharf on the bank of the river where sawn timber was stacked ready for the drogher* to carry… The mill owned two droghers which were capable of moving the sawn timber and also bringing back available logs.” From “Echoes of the Axe” by Charles Fenning, referring to a sawmill in Kendall.

*A drogher was a specially built vessel with shallow drafts to negotiate the river. 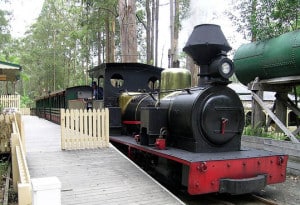 For a variety of reasons the contractor running the Steam Train gave the Wauchope Council notice in April 2009, that they were ceasing operations, and for the last 12 months the train has sat… with bronze becoming tarnished and the train only available as a static display. With about 1.5 kilometres of track including bridges, the train is a fabulous experience within the Park and we all look forward to it resuming its puffing trips.

Because the train is run in NSW, it must comply with standards set down by the Independent Transport Safety & Reliability Regulator (ITSRR). The Rail Safety Act of 2008 and related Regulations force the Timbertown train to have to comply with the same standards a Sydney suburban train or the XPT would have to comply with. Fortunately the train driver who decommissioned the steam train has all the detail and the new owners have planned for the train to be operative by Christmas 2011. 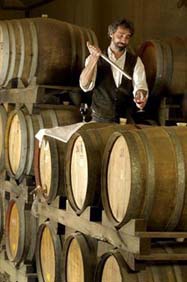 Another highlight for me was the specialist winery inside the complex. It combines contemporary wines and retailing with an appealing rustic style that draws you in. All the ports are fermented and made on the premises.

I stopped and sampled a few different ports. I couldn’t believe there was even a ‘breakfast’ port. I moved on, but later returned and purchased a 12 year old, Old Loggers Port, and a lovely drop it is too!

Timbertown Wines and fortifieds are part of the Bago Vineyard brand. Bago Vineyard is located in the Hastings River region and was established in 1985 by Jim and Kay Mobbs. Whilst you are tasting the wares you can browse the barrel storage and a variety of other locally made products.

Ceri soon got chatting to Alex Rullis a designer and maker of quality furniture in the village. She has been looking for a large bread-board and this was the ideal place. After selecting a piece of Camphor Wood, Alex gave it a few finishing sanding strokes before handing it to Ceri, who was delighted with both the board and the price.

Wallace’s Store is a walk down memory lane, and has the delightful smells of confectionery – handmade boiled sweets, specialty English candy and the traditional Australian favourites (musk’s and aniseed pencils, jaffas and caramel kisses).