Trending
You are at:Home»Uncategorized»Tanning Skins
By admin on December 31, 2014 Uncategorized 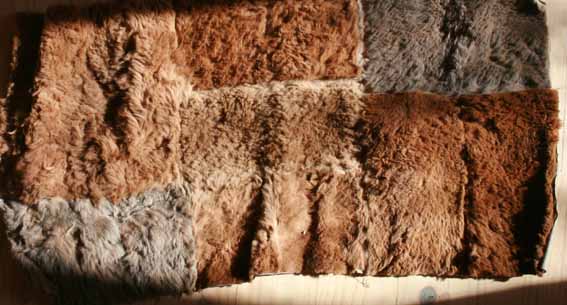 I imagine tanning skins or at least preserving them didn’t come too long after the ancient craft of hunting. The thought of using skins, particularly in colder climates must have happened as the skin was pulled off to bare the meat. Perhaps the first step was simply to wrap the fleshy skin around the shoulders! There would be little doubt that early clothing made from animal skins rotted, smelt and became hard and dried out. How clothing made from animals skins evolved is the history of tanning skins.

It is quite probable that tanning was accidentally discovered. Tannin leaches out of leaves, bark, and organic matter and enters water streams in many places around the world. One of our favourite drinks, ‘tea’ is an example of matter containing tannin. We could imagine a scenario where brown coloured water containing tannin was carried in skins, and over time the skin accidentally turned into leather.

The small mat you see above is made from kangaroo skins from the Centre of Australia. In the early years of my life, our family lived on kangaroo meat and each rectangle in this mat came from the back-piece of a kangaroo. I cured these small pieces as a young boy, some 42 years ago by sprinkling saltpetre (potassium nitrate) and alum on the skin, followed up with the application of liberal amounts of neat’s-foot oil. They didn’t turn out to be the supplest leather, but even after forty-odd years there is very little hair slip and the fur-skin has stood the test of time. Notice that the fur is very short as these kangaroos lived in the 45 degree heat of Australia’s desert interior. 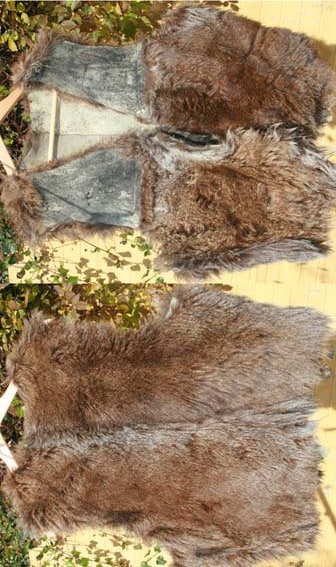 Years later and with much more experience I tanned many skins including, possum, wallaby, kangaroo, deer, goat and sheep. The four kangaroo skins making up the vest below were taken in the alpine country of Tasmania, and you will notice how the fur is quite long and fluffy, and in places has a white tip that easily blends with the snow fields (larger images here). This fur vest is over 30 years old and is still very supple and in very good condition. This item was tanned using the Leidrieter’s kit (no longer available) which used chrome salts and a neat’s-foot blend.

Australia has a many trees that contain significant amount of tannin including, Wattles, Mangrove Trees, Gum Trees, and also some fig, oak and honeysuckle trees.

1. The Art Of Tanning Leather:A New And Improved System Theoretically and practically Considered in all Its Details, written by David Kennedy in 1857 with 260 pages. “The following directions have been prepared expressly for information as to the practical application of scientific principles which characterize the progress of the improvement, and are offered to that portion of the public which is interested in the leather and tanning business.”

2. The Arts Of Tanning, Currying and Leather Dressing, written by Campbel Morfit in 1852, 570 pages in length. “The art of tanning is that by which animal skins are converted into leather, a product possessing certain characteristic properties, differing entirely from those of the raw material, and eminently adapting it to the useful purposes for which it is employed.”

3. California Tanbark Oak, published by US Department of Agriculture in 1911, with 54 pages. “Tanbark oak is, economically, the most important of the 15 Pacific coast oaks, because it furnishes the chief material used in the extensive tanning industry of that region. In 1900, according to the census, California ranked third among the States in the value of tanned hides produced.”

4. Fur Factswritten by Albert Ahern in 1922 has over 300 pages. “The object of this book is to encourage the man and boy in the country, on whom the future supply of fur depends, to take an interest in the small fur bearers that live in his district, and protect them during the summer and during the breeding season, and to only trap and hunt in the Fall and Winter, when the pelts are prime and the fur is valuable.

5. Furs and Fur Garments written by Richard Davey in 1895 is 184 pages in length. “The use of the skins of wool and fur bearing animals as convenient and readily adapted clothing, goes back to the remotest antiquity, even to the days of our first parents, who made themselves garments with the skins of beasts. This costume is common among all savage and half-civilized nations in cold, temperate and semi-tropical climates.”

6. The Furriers Friend: Dressing and Tanning Of Fur Skins and Hides, written by Gottfried is only 24 pages long but packed with useful information. “Preparatory to tanning the hides are to be soaked in clean, cold water. When they are green only a few hours to get the dirt and salt cut. When dry for 2 or 3 days until thoroughly soaked but water must be changed every day principally in summer. After 12 hours soak flesh all can be go ‘ten off and soak again…”

7. The Great Fur Land: Sketches of Life in Hudson’s Bay Territory, written by H.M. Robinson in 1879, with 367 pages. “In the the preparation of this volume the aim of the author has been to present some of the more picturesque phases of life in the Hudson’s Bay Territory, without wearying the reader with the personal business of the traveler. To this end he has shaped his material in the form of sketches, connected only by their order, which represents the seasons of the year in which the features treated periodically recur.”

8. Leather, Hides, Skins and Tanning Materials written by E.C. Snow in 1924 with 400 pages. “The volumes of this Series pass in review the material resources of the Empire, and constitute as it were, an imperial stocktaking. They deal with food and raw materials of every kind, summarize the present condition, of inter-imperial trade and indicate where further ievelopments are possible.”

9. A New and Complete Treatise on The Arts of Tanning, Currying and Leather Dresssing, by Professor H. Dussauce written in 1865 with a massive 720 pages. “We have consulted nearly all foreign and home publications; in a word, we have neglected neither pains nor trouble to make this work a standard one. We trust it will answer the purposes for which it is designed, and our reward will then be found in the services we have rendered to the profession. ”

12. Practical Tanning by Louis Flemming was written in 1916 and is 659 pages in length. “This volume is, as the title indicates, essentially a practical, and not a theoretical or technical, treatise, and it has been aimed to give the details of tannery processes with such clearness and precision that nothing further in the way of explanation is required. The receipts, formulas, and instructions that are given have been used in actual practice, or been tested experimentally, and their value has thus been demonstrated. Carried out with intelligence and care, they will produce satisfactory
results.”

13. Seven Methods Easy Methods For Tanning, Dressing, Scenting and Renovating Wool and Fur Peltries, written in 1860 by Chauncey Goodrich is 17 pages in length. “Process 1. – Remove all flanks and other useless parts. Then soak the pelt perfectly soft, and remove with a scraper or beaming knife all the oil, flesh, and other extraneous matter. Then take 2 quarts of newly slaked lime, and the same quantity of new clean wood ashes. Mix these to a paste, with clean water, to about the consistency of batter…”

14. The Sheep and Its Skin by Alfred Seymour Jones was written in 1913, 410 pages in length. “A text book of the history, breeds, feeding, diseases, and afflictions of the sheep; and of the pelt and wool conservation, fellmongering and wet-work treatment of the the pelt prior to tanning.”