Trending
You are at:Home»Uncategorized»Shearing Sheep
By admin on December 30, 2014 Uncategorized 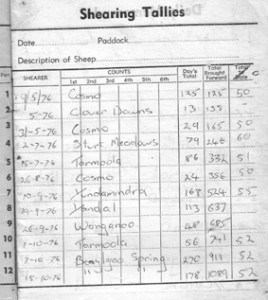 My first real job after leaving school at 16 was working in shearing sheds as a rouseabout in the hopes that I would quickly learn to shear and get a ‘pen’. A page out of my tattered old Tally book below attests to the few sheep I sweated over each day as a learner in the North-Eastern Goldfields of Western Australia. I also shows what we were paid per sheep in those days. I’m certainly not complaining about the ‘rate’ as the harder your worked and the more sheep shorn the more you earned. Can’t get more incentivised than that!

Once I reached a hundred sheep a day it seemed I was doomed to shear that small number forever! However, after shearing in the Hamilton district of Victoria and in Tasmania, my numbers slowly came up to where I could consistently shear 200 sheep per day. The years of shearing sheep taught me a great deal about being persistent and staying focused.

While living in Melbourne for a couple of years, I advertised in the Age to shear pet sheep, and soon built up a flourishing weekend business. I would ride out on my motorbike attending to all the bookings, mostly little lots of 2-10, shearing sheep with an electric handpiece. I also drenched, de-liced, trimmed the feet of the little pets. Most people gave me the wool plus five dollars for each sheep shorn which was great, and as business increased I made up a frame to carry wool bales on the bike. Often I would be riding home on the bike with a bale of wool hanging off either side, dwarfing the Honda 450, and bewildering the motorists as I rode home to inner city Melbourne.

The Federal Pastoral Industry Award had prescribed, since an employer application in 1927, that the width of the comb should not be more than 2½ inches measured from the outside points of the teeth. The AWU registered a rule (Rule 123 of the union) which made it an offence not merely under the award, but also against the union, for any shearer who was a member of the union to use combs wider than 2½ inches. 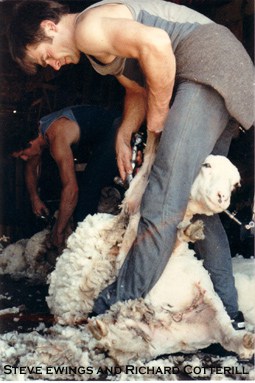 Ever since I started shearing sheep in 1976, I had what was called ‘pulled gear’. This was simply a way of making narrow combs a little wider by heating the outer two teeth on both edges of the comb and pulling them out. They couldn’t be pulled too far otherwise the cutter wouldn’t have enough ‘throw’ to cover the comb. Many of the shearers used this equipment, especially over in the West, although some pastoralists grumbled that it left ridges of wool on the sheep. Once the New Zealand shearers began pouring into Australia during the 1970s and 80s every shearer was aware that wider combs existed and they could be used in merino sheep.

In the early 1980s the shearing industry was close to 100 per cent unionised.  From 1981 onwards the AWU fanatically opposed the introduction of wide combs. At the time there were around 30,000 shearers taking the wool off 180 million sheep. In 1983, the wide comb issue came to a head with a 10 week strike by shearers, largely driven by the AWU.

Violence erupted at a number of sheds around Australia when people like me refused to stop work. The image you see below was taken whilst I was shearing sheep at a small shed in Tasmanian, and shearing sheds were burned to the ground nearby during this period (me in front row with pale blue jacket). The major result of this dispute for the AWU, according to its Federal Secretary at that time, Frank Mitchell, was that it lost 60 per cent of its pastoral membership within twelve months of the dispute (and a great many more members since then).

“So stir yourselves, you penners-up, and shove the sheep along the musterers are fetching them A hundred thousand strong”. These are words from the stirring poem, called Shearing at Castlereagh by Banjo Paterson that still prickles my skin and keeps alive my love of this part of my life. Shearing is a very old skill, and I’m proud to be named among the Shearers of Australia.