Trending
You are at:Home»Uncategorized»Scorched Earth
By admin on January 4, 2015 Uncategorized 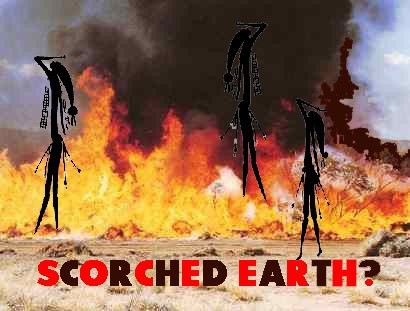 The English expression ‘scorched earth’ is synonymous with devastation, appearing ironic when early European Australians wrote poetically of ‘the land of sweeping plains’, which unbeknownst to them was largely fashioned by human fires. The title of this article, Scorched Earth derives from ideas in Giles writing and is of course his views on the use of fire by Aboriginal farmers is not shared by myself. Through the careful regulated use of mosaic burning there was no ‘scorched earth’ but the creation of a farmed or socialised landscape. While some researchers (Horton 1982) argue singularly for climatic change in forging the Australian landscape, Lewis (1982) and Singh et al (1981) suggest ‘Aboriginal burning’ was an important agent in faunal and floristic change.

Current palynological studies point to a general trend of recurring dry phases from mid-Miocene to Pleistocene transforming rainforest into dry schlerophyll, with concomitant increases in natural fires, caused by lightning (Kemp 1981, Haberle et al 1999).  However, a substantial increase or ‘charcoal spike’, obtained from pollen records at Lynch’s Crater, northeast Queensland occurs ‘around 38,000 years ago, and is roughly coincident with the earliest authenticated remains of Aborigines’ (Pyne 1997). Further south at Lake George in Victoria, charcoal deposition in samples of lacustrine clay suggest increases in fire activity from 128,00 BP continuing through to the Holocene (Singh et al 1981).

As a result of these, and other studies (sediment cores from continental shelf north-west Australia), Lewis (1982) draws the conclusion that there was, ‘pan-Australian use of fire across a great diversity of environmental zones and regional habitats’. Ethnographic and historical accounts place fire as an important component in Aboriginal life, with almost every aspect incorporating its usage. The table below is derived from published historical or ethnographic literature, and whilst all elements are not necessarily pan-Australian in practice, it serves to illustrate the potent cultural influence of fire and potential for impact upon the landscape.

Table 1. Use of Fire in Aboriginal Cultures

Problematic to the ‘socialised landscape’ view, based on ethnography and extrapolation into prehistory, is the issue of cultural practice and continuity over spans of time. Lesley Head (1994) argues strongly that an Aboriginal ethic of using fire to ‘clean up the country’, is a deep seated and long-standing tradition. Generally, the perception of Australia as a socialized landscape is derived from three planes of evidence, that is, ethnographical accounts, supported by direct evidence from plaeoclimatology and palynological studies, strengthened by historical documentation. The latter comes in many forms, such as Ernest Giles (1889) pyrphobic comment regarding Aboriginals as living ‘on fire instead of water’, and the cultural impact of fire around Sydney, described in 1770 by Joseph Banks (Flannery 1994).

The real question it seems, is not whether Aboriginal firing changed the landscape, but to what extent, where, and how chronologically did these events occur. What is lacking is an overlay of the evidence planes at specific regional levels. Refining investigative processes into these questions will contribute to longitudinal studies of Aboriginal firing regimes and may in turn provide more clues to patterns of colonisation in Australia.

Head, L. 1994, ‘Landscapes socialized by fire: Post-contact changes in Aboriginal fire use in northern Australia, and implications for prehistory’, Archaeology in Oceania, vol. 29, No.4, pp.172-81.