Trending
You are at:Home»Backpacking»Rope Knots
By admin on December 31, 2014 Backpacking

For the average person who only occasionally uses rope knots, it is helpful to learn a few knots which are easy to remember. These should also be easy to tie, and strong, secure and safe enough for a wide variety of purposes. Learning a few good knots and practicing them means you will be well prepared for the times when you need to tie secure knots and also undo them with ease.

Below there are some description of books on rope knots which you can download for free.

Pass the end of the rope round standing part b and through the bight (Fig 6).

Pass the end around a post and cross it over b (Fig 7). Pass around the post again, and put (a) through the second bight (Fig 8). This is essentially Two Half Hitches tied around an object.

Pass the end around a post (Fig 10), then around the standing part b, then three or four times around its own part c. 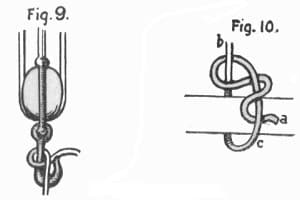 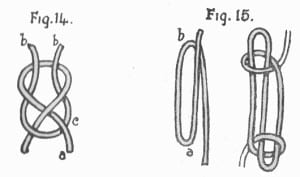 If you would like to know more about ropework and rope knots, there are some wonderful old books on the subject which can all be downloaded for free.

1. Knots, Splices and Rope Work, by Hyatt Verrill written in 1917,80 pages. “Giving complete and simple directions for making all the most useful and ornamental knots in common use, with Chapters on Splicing, Pointing, Seizing, Serving, etc. Adapted for the use of travellers, campers, yachtsmen, Boy Scouts, and all others having to use or handle ropes for any purpose.”

3. Flax, Hemp and Jute Spinning and Twisting, by Herbert Carter written in 1907, 223 pages. “This volume is designed to supplement existing and out-of-date treatises, and to provide, at a reasonable price, a text-book for technical students and a practical hand-book for the use of those engaged in the spinning and twisting of flax, hemp, or jute.”

4. Rope and Twine Information, by A.L. Sykes, 80 Pages “In the year 200 B. C. ships of Syracuse were rigged with rope made of Hemp grown in the valley of the Rhone, and Pliny tells us that towards the end of the first century this fibre was in common use among the Romans for Sails and Cordage. In America the manufacture of Cordage by European methods began in 1662. The name Rope is generally applied to Cordage exceeding one inch in circumference. Ordinary Threads, Twines, Cords and Ropes, may be composed of two or more single yarns twisted together. A single thread is termed a yarn. Were a rope to be formed by simply twisting together in one direction the wliole of the fibres of which it is composed, there would be nothing to prevent its untwisting as soon as left to itself. It is therefore necessary… ”

5. The Use Of Ropes and Tackle, by H.J. Dana and W.A. Pearl written in 1922, 75 pages.”A variety of knots and splices are shown with occasional suggestions as to their use and application. Some knots tie easily and are very secure but are not so easy to untie; others are easily and quickly tied- are secure and yet are not difficult to untie. Some knots are suitable for small cords only, and others are adapted to large ship’s hawsers. For these and other reasons, it is desirable to select the right knot for the job in hand.”

6. The Kedge Anchor or Young Sailors Assistant, by William Brady written in 1882, 458 pages Illustrated by 70 engravings. “To the practical evolutions of modern seamanship, rigging, knotting, splicing, blocks, purchases, running rigging, and other miscellaneous matters, applicable to ships-of-war and others.”