Trending
You are at:Home»Horseback»Horses Age
By admin on December 31, 2014 Horseback 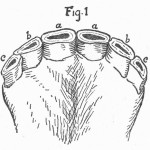 Gauging a horses age can come in handy, particularly when you are purchasing a new horse. At three years (Fig 1) the horse will have two permanent teeth – aa. The remaining four (b b and c c) are foal teeth. The black marks of the teeth in the centre (a a) will be very plain, but in others signs of wear will be seen. 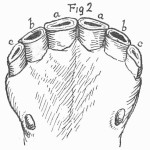 At four years (Fig 2) the next two permanent teeth have appeared (b b), the foal teeth remaining (c c). The central nippers (a a) will have lost their sharp edges, being worn down a little.

At five years (Fig 3) the central marks in (a a) will be a worn a good deal, leaving only a black speck. The next two (b b) will be worn to a lesser degree, the last two permanent to come (c c) showing the mark very plainly. 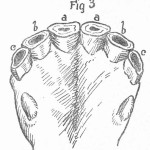 At six years (Fig 4) the centre teeth (a a) will show a very small black spot, and (b b) will show a good deal of wear, with (c c) still showing plainly.

At seven years (Fig 5) the marks of (a a) will be obliterated, the marks in (b b0 will be very small, but in (c c0 they will still show plainly the horses age. It requires a good deal of practice to tell a horses age after seven years, and the teeth of the upper jaw must be studied. 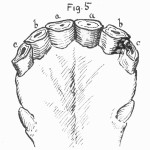 At about eight years the upper teeth will be in about the same condition as the lower at six. Until the horses age is between six and seven the teeth grow nearly perpendicular to each other as in Fig 6. From then on they gradually extend in a straight line from the jaws till in very old age they would appear where the dotted line is marked. Teeth of a very old horse; as a horse gets old the teeth become rounder in shape and get very discoloured (Fig 7). 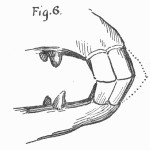 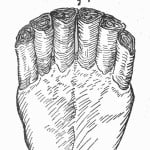