Trending
You are at:Home»Uncategorized»Cyclone Bed
By admin on January 10, 2015 Uncategorized 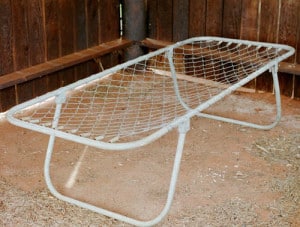 A cyclone bed was commonplace in the Australian outback up until the 1970s and then they slowly disappeared. The name ‘cyclone bed’ gets its name from the chain-link wire mesh which covered the frame. This wire mesh was often referred to as ‘cyclone wire’ or ‘cyclone fencing’.

The cyclone bed on the right is a luxurious version of the bed and you will note that at both ends there are springs attaching the mesh and frame. This provided a little more ‘give’ in the bed than other older types which were simply stitched to the frame with wire. If you were lucky you might sleep on a this wire base with an old lumpy kapok mattress, otherwise you would simply roll out the swag and climb aboard. Kapok was a cotton-like fluff that old mattresses were stuffed with. The worst thing about the bed is the tendency of mesh to sag, so you sleep like a banana. Although the sway back was uncomfortable it does lift you off the ground away from the slither of snakes and other creep crawlies that may want to share your swag. 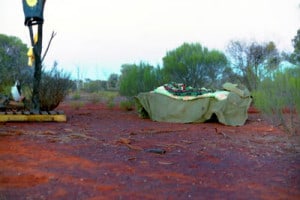 In my early shearing years most shearers quarters still used the folding cyclone bed. At this point I have introduced another feature of this relic, that is, the legs could be easily folded against the frame for stowage and transport.

For instance when I worked in the bush as a driller in Western Australia we camped wherever we were drilling at the time. The cyclone bed was ideal as they are indestructible, simply folded up and thrown on the truck for the next move. 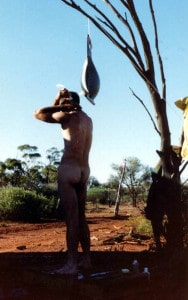 Today of course there are many folding camp stretchers that are lightweight, comfortable but they wouldn’t take the punishment like the old cyclone bed.

Look closely at the picture on the right and you will see the en suite to the left. This is where we had our showers using a wooden pallet for the floor and a solar shower bag. On other days I wasn’t so fortunate as to have a floor and we showered with muddy feet.