Trending
You are at:Home»Fishing»Catch 22
By admin on January 8, 2015 Fishing

A Catch 22  is a problematic situation for which the only solution is denied by a circumstance inherent in the problem or by a rule. For Australia in terms of fishing this is true. The ocean has been called “cradle of life on earth”, giving rise to all life.  Of the 33 animal groups or phyla currently known, 28 are found in the sea (National Oceans Office). As an Australian it is interesting that Australia’s Fishing Zone is the third world’s largest, comprising some nine million square kilometres. However, Australia ranks only about fiftieth in world fish production in tonnage terms (DEH 2001), with China topping the list (see graph) our Catch 22. 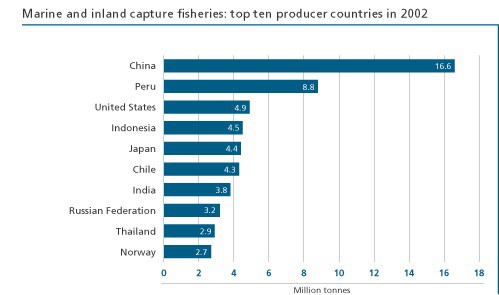 This presents a catch 22. How can Australia have the 3rd largest fishing zone, and produce such low tonnage? In an age where resources are suffering massive depletion, it should also impress upon the average Australian that we must protect our fishing resource from over exploitation.

Australia is not necessarily low on marine diversity, but its surrounding and inland waters certainly does not hold the quantity of fish compared to other continents. About 86% of the worldwide annual commercial catch (fish and shellfish) comes from the ocean and 99% of this is taken from coastal waters within 370 km or 200 nautical miles from the coastline. The narrow coastal fringes of the world’s oceans are at once its most productive and most vulnerable zones.

It seems that Australians have finally conceded that their Australian landscape is not as productive as the original homelands of Europe. This acknowledgement has been a long time coming, but not before significantly damaging great regions of this country, and some irreparably. “The low average productivity of Australia soils has had major economic consequences for Australian agriculture, forestry, and fisheries” (Diamond 2005).

The low productivity results from the continent being exposed for millions of years, and “many parts of the dry Australian interior having weathering profiles up to 100metres in thickness. Australia is the smallest, flattest and driest continent, a veritable museum of ancient landscapes…” (Bloom 1998). Western Australia has a million square kilometres of rocks older than 2.5 billion years (Yilgarn/Pilbarra cratons nearly 4 billion years old), with little to no uplift, or downwarping, with much wetter conditions in the past (Skinner and Porter 1987). As a consequence, much of the nutrient has already leached from the country; couple this with Australia’s low rainfall and it provides little opportunity for any significant nutrient runoff to the sea. Further to this, the other two soil generators, that is, volcanoes and glacial action are recently non existent on any scale.

It cannot be said that Australians have the same understanding, that our surrounding seas are unproductive, for many still seem to hold an idea that our oceans are vast repositories of unlimited resource, hence the catch 22. “One doesn’t immediately think of fisheries as dependent on soil productivity; after all, fish live in rivers and in the ocean, not in soils. However, of the nutrients in rivers, and at least some of those I oceans near the coastline, come from soils drained by rivers and then carried out into the ocean ( Diamond 2005 pg 382).

Put simply, an unproductive land creates an unproductive coastline. Remembering that 99% of fish are extracted relative to coastline and we begin to appreciate that Australia must protect its fisheries, another catch 22. Fish stocks are highest within 200 nautical miles of the continent due to coastal upwelling and land runoff, making nutrient levels higher nearest the continents. In the open ocean productivity drops off.

Looking at the list it can be seen that points 3, 4 and 5 explain why Australian waters do not contain the vast numbers of fish compared to other continents. Runoff from land and Australian coasts do not have comparative vertical mixing or nutrient supply, which would otherwise create high rates of primary production per unit area. The lack of coastal zones with intense upwelling, combined with prevailing winds, surface currents, also results in very low rates of primary production per unit area.

By way of explanation, “Upwelling is another phenomenon of oceans. It occurs when strong winds bring dense waters to the surface, against the force of gravity. Upwelling is important to the ocean ecosystems because it solves the dilemma of life in the ocean. For example, how does the food-chain begin when sunlight is only available near the surface, but essential nutrients from decaying organic matter are on the ocean floor? The answer is that upwelling returns nutrients to the surface. The richer fishing grounds of the world depend on a flourishing food chain, and it is interesting to note that Australia does not have any really rich fishing grounds because the winds here are generally not conducive to upwelling” (CSIRO).

By way of contrast, the massive topsoil runoffs into the South China fertilize the ecosystems of this coast, which benefits from the eroding topsoil of China. Of global concern is the elimination of estuaries by development, and the direct kill of coastal life by pollution negating the possibility of topsoil erosion increasing the fertility of continental shelves.
“Nutrient overenrichment gets relatively little public attention, but creates perhaps the greatest havoc in the marine environment. In 1990, the United Nations’ Group of Experts on the Scientific Aspects of Marine Pollution identified nutrients as the most damaging class of pollutants in the marine realm.

The image on the left is a toxic attach through nutrient over enrichment in coastal rivers promotes growth of toxic dinoflagellates that kill fish by feeding on their flesh.
Photo: NCSU College of Veterinary Medicine. Excess nutrients can cause dramatic changes in the ocean’s food web, altering the kinds of microorganisms that predominate, says the Center for Marine Conservation’s Norse. “Excess nutrients can change the marine system because you’re changing the primary producers.” Nutrients in human sewage for example, apparently favor the growth of toxic microorganisms in warm water, including certain species of dinoflagellates, over nontoxic algae. “Red tides,” blooms of these toxic dinoflagellates, can poison shellfish and cause people who eat them to have diarrhea or even memory loss. In rare cases, people have died after eating shellfish contaminated by toxic dinoflagellates (EHP).

“These blooms, rather than enhancing oceanic productivity, tend to interrupt the natural cycle, providing an overabundance of organic matter to the ocean bottom (see Creeping Dead Zones) and frequently enhancing the growth of noxious or toxic phytoplankton.” (NASA)
“Coastal ecosystems play a key role in the transformation, transport, burial and exchange of water and organic and inorganic carbon and nitrogen between land, atmosphere and the ocean. With an overwhelming majority of the human population living in the coastal zone and with runoff from entire continents funneling through estuaries and ocean margins, coastal systems are among the most heavily impacted ecosystems on the globe”. (LTER PIE)

This article Catch 22 that shows that on understanding how and why Australia’s fishing zone is so poor, also furnishes us with ample and powerful reasons to violently protect our marine and coastal environments. Not only is this protection necessary internally, halting internal pollution and over exploitation, but most importantly we cannot allow other nations to destroy our marine resource.